For many years, the German flute makers Erik and Hans-Jürgen Friedling have been dealing in their small family manufactory with the traditional construction and the history of a flute that is still little known in Germany – the so-called Native American Flute.

"Indianerflöte" is the German name for the traditional flute of some Native American tribes from North America. It is a flute with a wide bore and made as an external flue pipe, which is first mentioned in writings by the white conquerors late in the early 19th century. Early images of the painter George Catlin (†1872) and the Swiss explorer Karl Bodmer (†1883) (Fig. 1) have become known, but the exact genesis and origin of these flutes is, apart from some historical artifacts, that can be dated back to the 8th century, probably forever hidden in the dark mist of history. 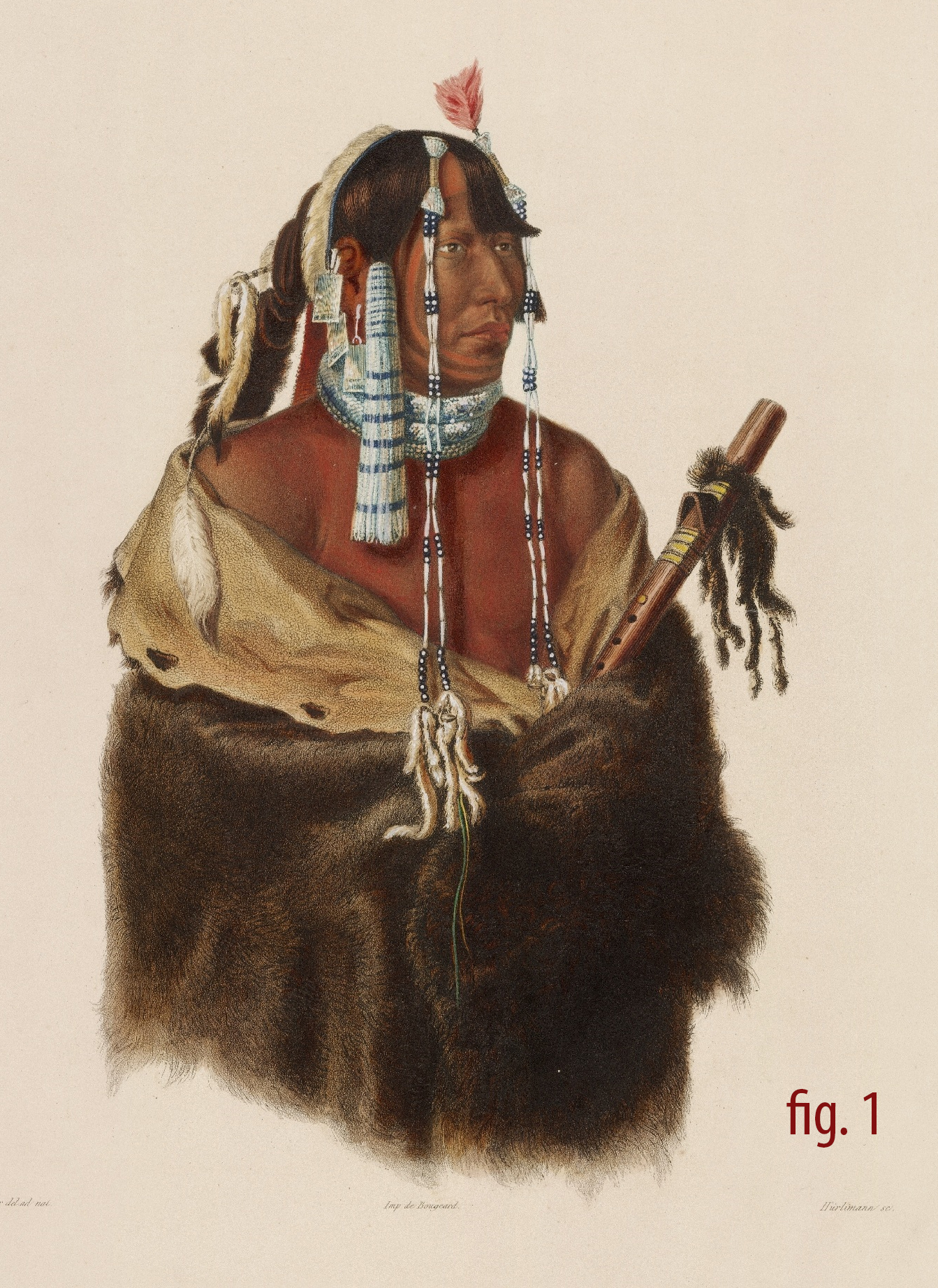 It should be noted, however, that both the edge-blown pre-Columbian Anasazi and Pueblo flutes from the southwestern United States and the South American Quena recorder from the Andes are of course also of native american origin and also authentic native american flutes. Since they come from other, older cultures and are built in a complete another way, the difference to the native flutes from North America is obvious.

As in other cultures, the indigenous societies of North America cultivate a rich heritage of myths and narratives about their musical instruments. In it, the flutes are often magic instruments or generous gifts of gods and strange creatures such as the fluting Kokopelli (fig. 2.) drive their jokes with the people as tricksters. Rather secular nature is the historical fact that Lakota men carved flutes to win their chosen ones by playing the flute – hence the term "courting flute". 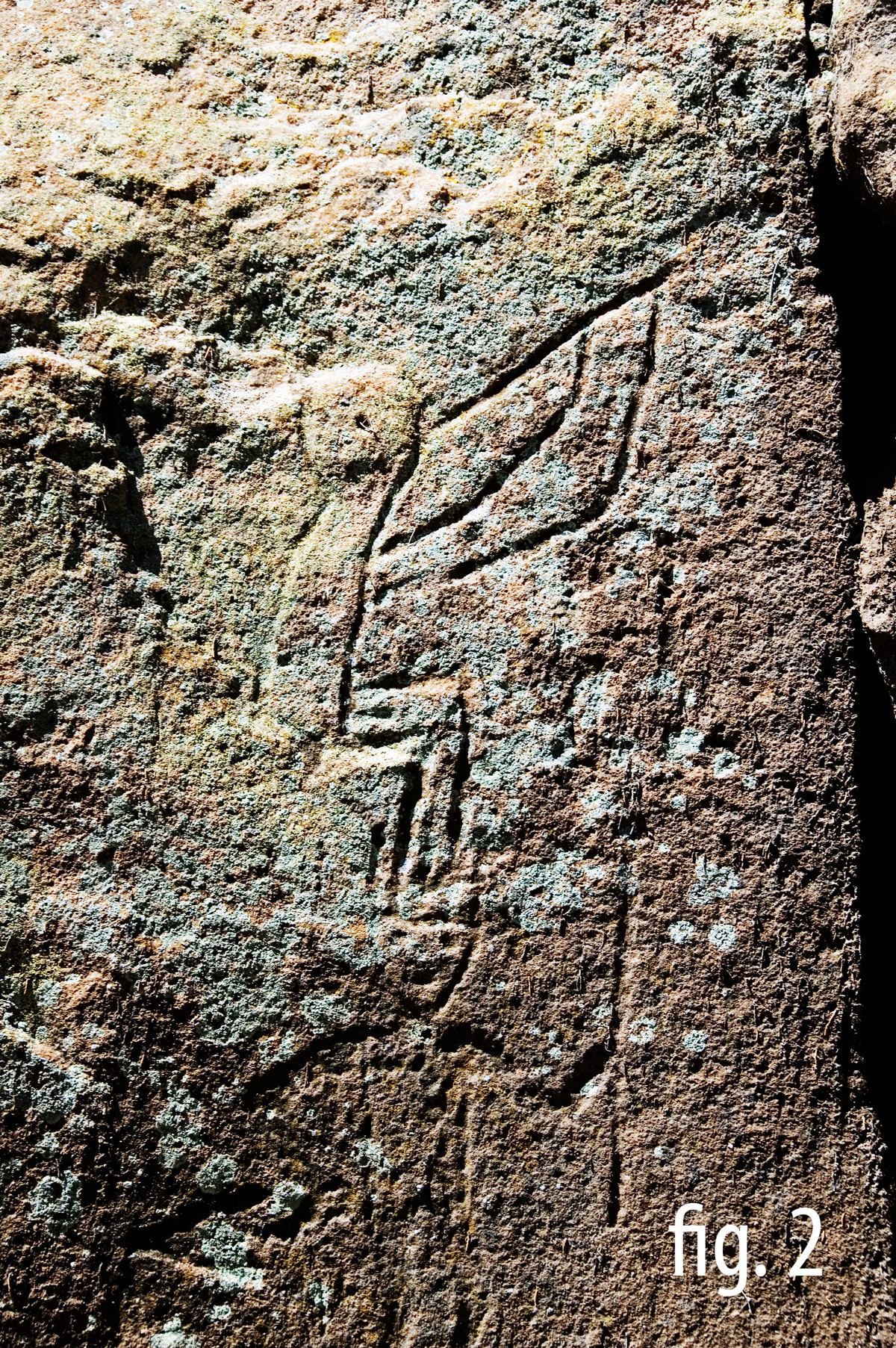 To what extent the Native American Flute was actually used in a ceremonic or shamanic way can only be assumed today due to the lack of source material. If you want to know more, you will find in the Flutopedia (www.flutopedia.com) by Clint Goss a comprehensive Internet reference book on the history of Native American Flutes along with building instructions, playing tips, scale material and much more.

At the beginning of the 20th century, the Native American Flute was largely forgotten due to the repression of indigenous culture by the US government. Many Native American tribes with probably long flute traditions also lost touch with their cultural heritage. This changed only gradually with the emergence of New Age-, ethno and world music. Just think of the influential flute recordings of Paul Horn (CD "Inside the Taj Mahal", 1968) or the recordings of clarinetist Tony Scott (CD "Music for Zen Meditation", 1964). At the same time, there was a growing interest in ethnic instruments, mainly from India, Japan and Native American culture.

The amazing renaissance of the Native American Flute began in the 1970s, when more and more musicians and flute makers began to study this particular ethnic flute. For example the historical replicas of Michael Graham Allen (aka Coyote Oldman), who also transferred his experience as a player of the Japanese shakuhachi to the native american flute caused a lot of attention and influenced a whole generation of young flute makers and musicians. Other well-known flutists are Mary Youngblood, Peter Phippen, Robert Tree Cody, Scott August and above all the great initiator of the Native American Flute R. Carlos Nakai. In his pioneering book "The Art of the Native American Flute" (1996), he developed an easy fingering system and a special notation with tablature and made many successful solo recordings, which attracted worldwide attention.

A typical Native American Flute consists of a cylindrical tube separated by a plug in the upper quarter into two chambers. The lower flute section consists of sound hole, splitting edge, labium and finger holes. (fig. 3) Sometimes there are additional direction holes at the flute end, which limit the effective tube length and then allow even elaborate carving with a closed hole at the end. The upper section contains the characteristic wind chamber (called slow air chamber) and consists of the breath hole and a first cut just before the plug. To create a gap with air duct, a block is attached with a strap over the flue. When blowing into the flute pressure is built up in the wind chamber, which escapes through the SAC exit hole in the flue under the block and generates the sound on exiting into the so-called true sound hole at the splitting edge. The area directly under the block is called nest. Sometimes the block is called even totem or fetish and is mostly made of hardwood.

Since moisture accumulates quickly in the wind chamber during playing, it is important that the block is loosely tied up and can be removed to dry the flute. The main task of the block is to close the air duct downwards and the rest of the design is therefore little limited: From shamanic animals to fantastic carvings, everything is possible. In general, a rich ornamentation of feathers, beads, bones, ribbons, marquetry and engravings is widespread among Native American flutes and adds to the individuality of each flute.

Native American flutes are traditionally made of split or sawn wood in a 2-strip-construction. Bamboo or reed came as a substitute if no wood was at hand. A preference in the selection of certain woods is not recognizable. Native American flute makers have probably always uses all types of wood that were currently available and even light woods as the Canadian cedar is used. Because a sharp edge is difficult to cut in fibrous wood, it was often common for historic flute makers to use a thin spacer plate on the nest to get a good splitting edge. (fig 4.) 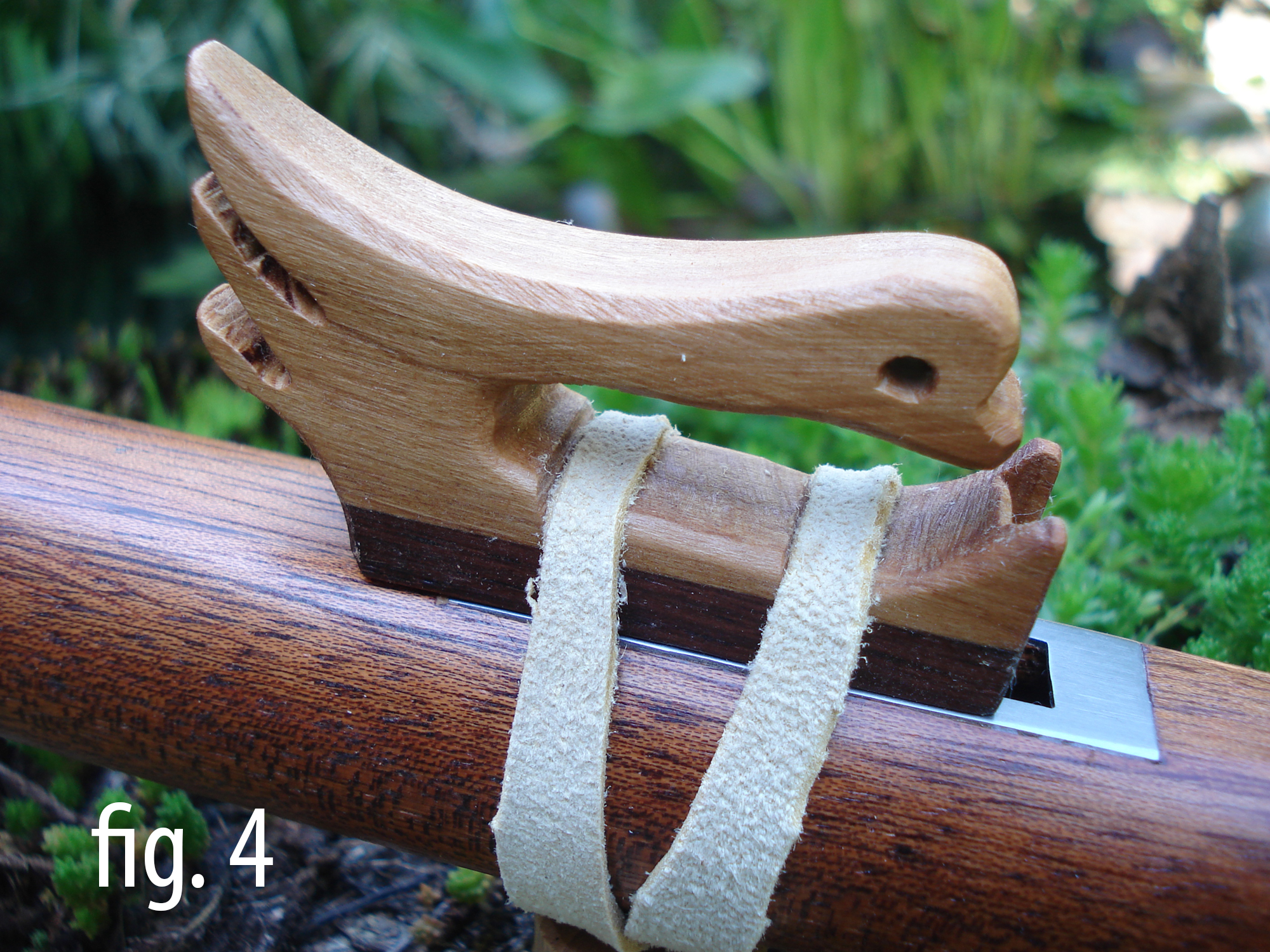 The strips are manufactures separately and then carefully glued and tied together several times. The bindings are a decorative feature, but similar to the bamboo flutes also a protection against cracking. Native American flutes are often made as unique pieces only by hand and even finger holes are burned instead of drilled. Completely drilled and turned flutes are common in recent times and a concession to the mechanical mass production. Meanwhile, there are some major US manufacturers, which are increasingly dominant in Germany and compete with the small local manufactories. Nevertheless, in the Native American Flute scene, there is still plenty of room for individual design for the individual flute maker and, due to the lack of standardization, an exciting field for experimentation (fig.5). 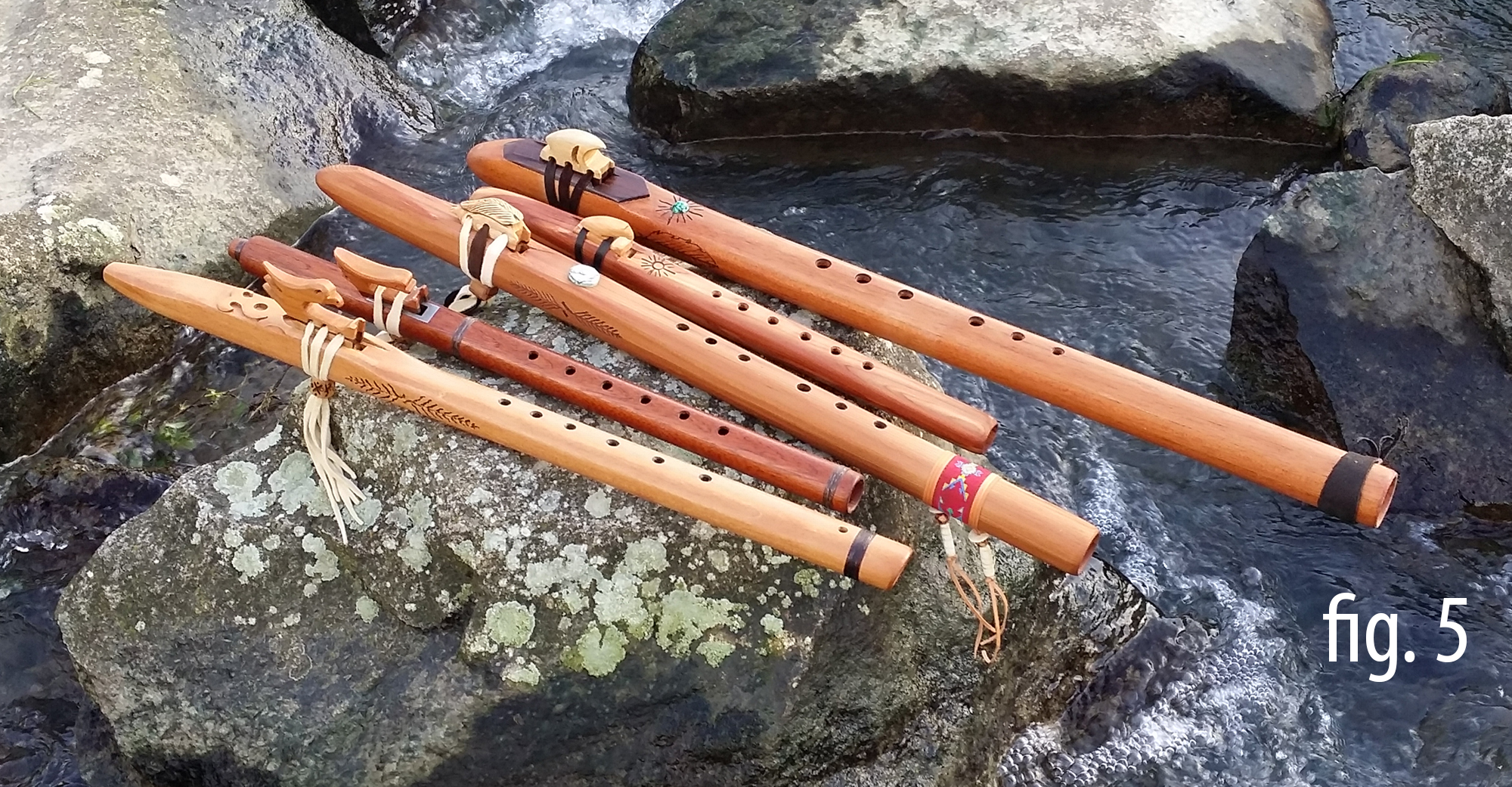 A special variation are the branch flutes, which are made from whole branches and can take on extremely bizarre shapes (fig. 6). 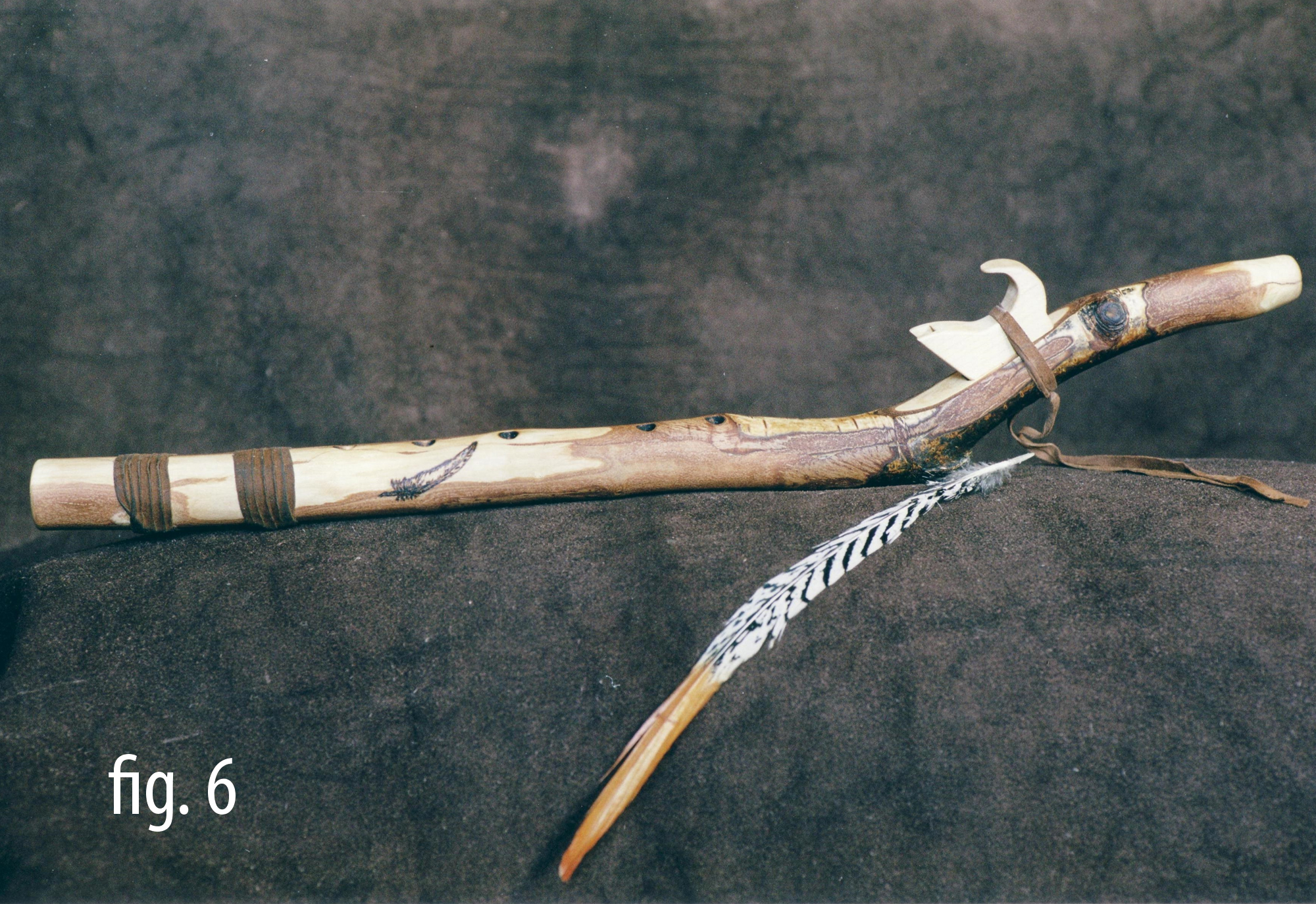 Some contemporary Native American Flutes have even more than one tubes to produce sound and are a little bit similar to bagpipes with different drone sounds. These instruments, known as drone flutes, sometimes have a separate breath hole for each tube as well as other tone holes, which can be closed with pins and leather straps.

The archaic construction is quite simple compared to the recorder and very tolerant in the sound production. Nevertheless – a lot of experience and careful workmanship is necessary to build an exactly tuned Native American Flutes in concert quality. 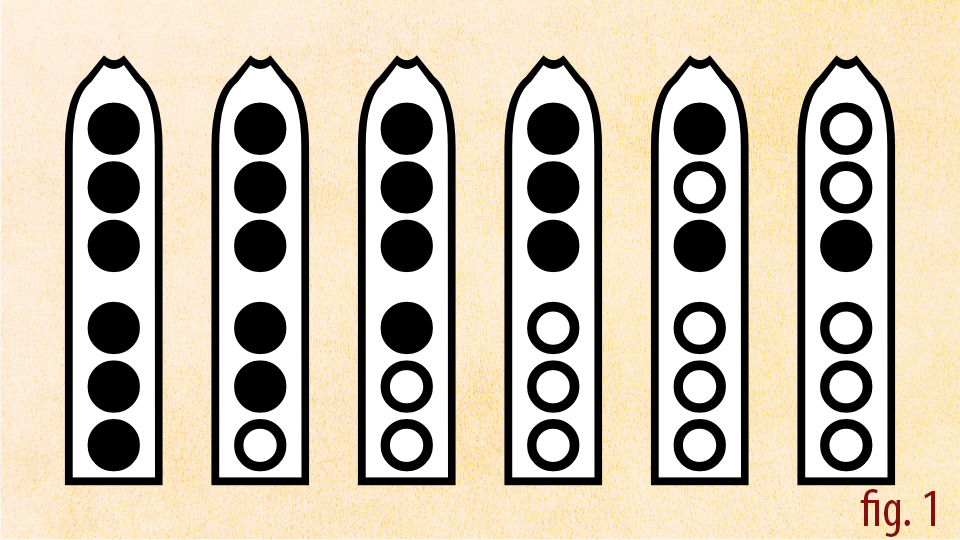 It is difficult to overblow Native American Flutes because of their wide bore and the wind chamber – therefore the range rarely exceeds one and a half octaves. The fundamental note is usually in the one- or two-line octave, with the lower pitch predominate. Nevertheless – Native American Flutes are available in all pitches, and even flutes for children and large bass flutes are available.
Native American Flutes convince mainly with their expressive sound. Its strength lies more in the slow meditative playing with conscious breathing than in the quick playing with virtuoso finger acrobatics. Due to the high noise content and the indirect playing with the wind chamber the sound is very soft, warm and rich and full with overtones that gives many listeners the feeling that the sound is deeply connected with peace, nature and wide landscapes. Due to the minor pentatonic tuning, the flute is perfect for improvisation and similar to the playability of the Swiss "Erdklang" flute (see the portrait of Alf Jetzer in Windkanal 2003-1) and other pentatonic flutes.

Much of the success of the Native American Flute is due to its easy playability. You do not need years of practice or knowledge of music theory, no special finger or mouth technique, no special lip tension or great blowing pressure. Yet thanks to the minor pentatonic basic tuning, even the beginner will soon be able to play amazing melodies and impressive sounds.
The Native American Flute is not only an ideal instrument for beginners, but also offers a new and fresh way to music for experienced or professional musicians through its intuitive approach. Quite typical for the free improvised playing by ear is the orientation to scales. In addition to major and minor scales, there are many other interesting scales, which are perfect if you want to play in a free improvisation way. Especially Japanese and Oriental music is rich in pentatonic and heptatonic scales. The notation is less in notes and more in fingering overviews and tabs.
All articulation, tongue and finger techniques that work with other flutes can be transferred directly to the Native American Flute and musical ornaments naturally make the game lively and varied. Since the Native American Flute is often played in free nature, many ideas arise very directly through the imitation of natural sounds, for example, the chirping of a bird, the whispering of the wind, the murmur of a river, the cry of an eagle or the barking of a dog.

Like other ancient cultures, the culture of the northern tribes did not originally have a written music tradition – all notations date back to later times. Nevertheless, ambitious flutists and music educators can refer to a huge repertoire of old melodies and traditional songs. Many Contemporary adaptations of pop songs, children's songs, folk songs and even christmas-carols – most of the stuff even free on the internet – complete the repertoire. For particularly successful CDs, you can find even special songbooks and play-alongs.

A special feature of the Native American Flute since its rediscovery has been its embedding in a lively and networked flute scene, composed of equal parts by professional flute makers and enthusiastic amateur builders. Due to the simple construction of Native American Flutes, one can quickly build beautiful flutes without a professional workshop. Many building instructions circulate free on the Internet and social media websites, e-mails and video portals make it easy to exchange knowledge and building experiences. Just like in the US, there is also a growing subculture in Germany with flute-circles, concerts and organized workshops for building and playing.

The intuitive and easy access to the instrument makes the Native American Flute interesting for professional musicians, sound- and music therapists. They can find in the flute an ideal melody instrument to complement their monochords, singing bowls and rhythm instruments. In the US the use of the Native American Flute is already more advanced and the large pentatonic flutes are used successfully in geriatric care, for dementia and respiratory diseases, for trauma and coma patients, and even for motoric handicapped people.
Despite their long historical tradition Native American Flute are still relatively new in the international flute scene. For this reason it remains very exciting to see what potential will be discovered in the future and where the path will lead in the next years.